I watched a news item on BBC Breakfast TV this morning about a chap called “Mr Doodle“ (his real name is actually Sam Cox).

The BBC was treating him as if he’d invented a completely new way of creating art – which is what prompted this post.

In fact, it looked very much to me as if he’s trying to emulate the style of Keith Haring (1958-1990) – minus the homoerotic / sexual aspects of the latter’s work. Mr Doodle’s artwork seems to focus more on what look like kiddy cartoon characters – BUT the style of drawing is very, very similar. (I do wonder at times what the BBC losing competent arts journalists is doing to its coverage of art).

Haring was very much a pop culture artist of the 1980s. I well remember reading about him at the time and being completely amazed by nature and scale of his artworks.

He became an established artist by 1983 but preferred to keep his prices low so that his art was more accessible.

Haring created the Pop Shop in 1986 in the SoHo district of Manhattan, selling T-shirts, toys, posters, and other objects that show his works—allowing his works to be accessible to a larger number of people. Speaking about the Pop Shop in 1989, Haring said: “For the past five or six years, the rewards I’ve gotten are very disproportionate to what I deserve…I make a lot more money than what I should make, so it’s a little bit of guilt, of wanting to give it back.” Wikipedia

Haring’s VERY distinctive signature style has been much copied over the years by:

The reason Mr Doodle got a significant spot on the BBC is because he’s doodled his house in Tenterden in Kent – absolutely everywhere. Apparently the neighbours don’t mind. I’m wondering if they might should opening the house to the public is the next step!

I doodled my house pic.twitter.com/hHhNvqKPqa

It struck me that the house in Tenterden might not be where he and his wife actually live – mainly because of the almost total absence of furniture (who actually lives like that?). It’s possibly a property which has been transformed to create a marketing commodity. It’s certainly been paid for by his previous successes in the marketplace.

Apparently, Mr Doodle has been doing

extremely well with his doodles in the auction markets and with exhibitions across the world. Indeed he’s been covered by the reputable art journals and major newspapers.

In an email, Cox told Artnet News that he created his alter ego in December 2014, when he was still an ambitious but somewhat unassuming student in the illustration program at the University of West England in Bristol. One fateful day, he waltzed into class “fully dressed up in my hand-doodled attire,” at which point the instructor gave him the nickname that now gets auction paddles waving around the world. 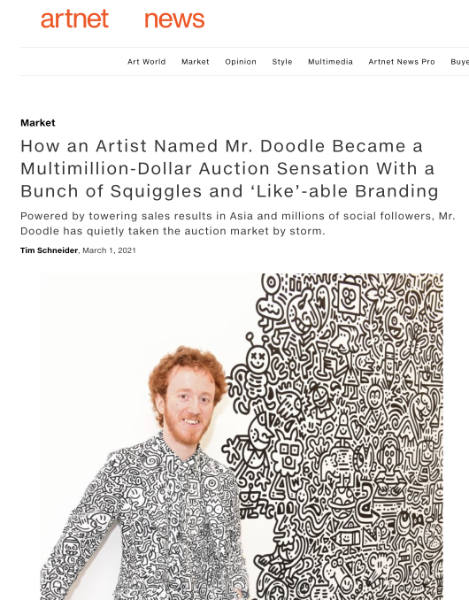 Since (university), Cox’s work has exploded in popularity, earning him exhibitions in London and Seoul as well as countless collaborations with brands including MTV, Adidas, Fendi, and Puma. His work debuted on the secondary market in March 2020; by August of that year, his painting Spring (2019) had sold for nearly $1 million at auction. Cox has embraced the theatrical performativity of his Mr Doodle persona, wearing his hand-drawn clothing for public appearances and establishing an extended mythos for the character.

He seems like a nice personable chap with the energy to keep creating his art – and a very clever branding and publicity/PR agent.

However, I must confess I’m allergic to anybody who seems to create art as a way of creating a branding empire so I’m not a fan.

I’m also not a fan of some of the subjects of Haring’s art – but I do very much prefer ‘total originals’ rather than what seems to me like a ‘style replica’.

While recognising that Picasso said

it still comes across to me a bit like those stylists who copy Parisian couture….. They can be very, very good – but it’s just not the same…..

Interestingly while Keith Haring has an extensive Wikipedia entry – of the art history kind –  Mr Doodle has none.

This may of course change in the future – his PR agent may just not have got round to it yet…. 😉