Thank you for signing up for The Nation’s weekly newsletter.

Thank you for signing up. For more from The Nation, check out our latest issue.

The Nation is reader supported: Chip in $10 or more to help us continue to write about the issues that matter.

Did you know you can support The Nation by drinking wine?

ew rleans, a.—The crush of fans pressing their way into Gentilly Boulevard gate at 11 am last Friday revealed a pent-up desire, at last satisfied: The New Orleans Jazz & Heritage Festival was back.

Owing to the pandemic, the festival was canceled in 2020 and ’21—the first dark years of its 53-year history. Even in 2006, just eight months after the floods resulting from the levee failures following Hurricane Katrina, the show went on. “We knew that if we put this big, soul-generating battery on and people could plug in, it’ll mean something,” festival producer Quint Davis told me then. At the time, New Orleans endured what David Winkler-Schmidt of the local Gambit Weekly called “the horrible unending of not knowing.” Now the festival, whose second weekend runs through May 8, returns as we all crawl out from unending feelings of not knowing.

At the first Jazz Fest, in 1970, Duke Ellington, the only out-of-town artist, played his “New Orleans Suite.” Tickets were $3, and about 350 people showed up. The event lost money. Now, some 650 bands, from local heroes to pop stars, perform at 14 stages at the Fair Grounds, the horse-racing track that becomes a music stadium once a year. A typical one-day ticket costs $90. In 2019, 450,000 people attended. The Fair Grounds infield is filled with local cuisine and crafts, through which Social Aid & Pleasure Club second-liners wearing Sunday finery regularly parade and Mardi Gras Indians, local culture-bearers who mask in elaborate feathered-and-beaded suits accompanied by hand drums and chants, form dynamic processions. On this year’s opening day, a mock jazz funeral honored the festival’s founder, George Wein, who died in September. A Sunday Jazz Tent set paid tribute to pianist and educator Ellis Marsalis, who died last year from complications of Covid-19.

In New Orleans, local culture resonates safely within the confines of the Fair Grounds. The city beyond, where spirits of ancestors echo through various forms of music and dance, is a more complicated story. In 2007, three days before members of the Nine Times Social Aid & Pleasure Club danced their way through the festival’s Fair Grounds, mock second-lining with the Mahogany Brass Band, they were represented in federal court. A consortium of clubs, aided by the ACLU, defeated jacked-up city permit fees for their Sunday brass-band-led second-line parades in federal court, on First Amendment grounds. Later that year, police busted up a memorial procession for a beloved tuba player in dramatic fashion in the Tremé, after a resident complained about the noise, reigniting a long-standing fight over who owns the streets. This narrative unfolded despite the city’s pervasive reliance on these traditions to rekindle a tourism business that, according to one recent report, welcomed 19.75 million visitors in 2019.

During the past decade, as a still somewhat undefined “new” New Orleans rubs up against whatever is left of the old one, a revival of rarely enforced ordinances regarding noise, zoning, and permitting—much of which reveals the strange irony that, in much of New Orleans, live music is often technically illegal—has prompted a fresh groundswell of activism. This has happened in the context of swift gentrification of neighborhoods such as Tremé, long a hothouse for indigenous culture. In a 2019 New York Times Op-Ed piece, Lolis Eric Elie, a former columnist for the New Orleans Times-Picayune, lamented “how Mardi Gras Indians, musicians and members of parading organizations are being marginalized in a literal way,” and that, just now, “the crowds around them aren’t mostly black renters but white homeowners and Airbnb guests.” It bore the headline: “Gentrification Might Kill New Orleans Before Climate Change Does.”

Last Friday, just after Jazz Fest opened, Donald Harrison Jr., an alto saxophonist honored this year as a National Endowment for the Arts Jazz Master, directed an ensemble of “interns” from a music-education program he’s led for more than 25 years. A few hours later, Harrison performed at the Fest’s Congo Square Stage with his own ensemble, moving suavely from bebop-based jazz to “Hey Pocky Way,” a modest 1974 funk hit for the Meters (and, later, the Neville Brothers) with a title adapted from the Mardi Gras Indians’ inscrutable language. 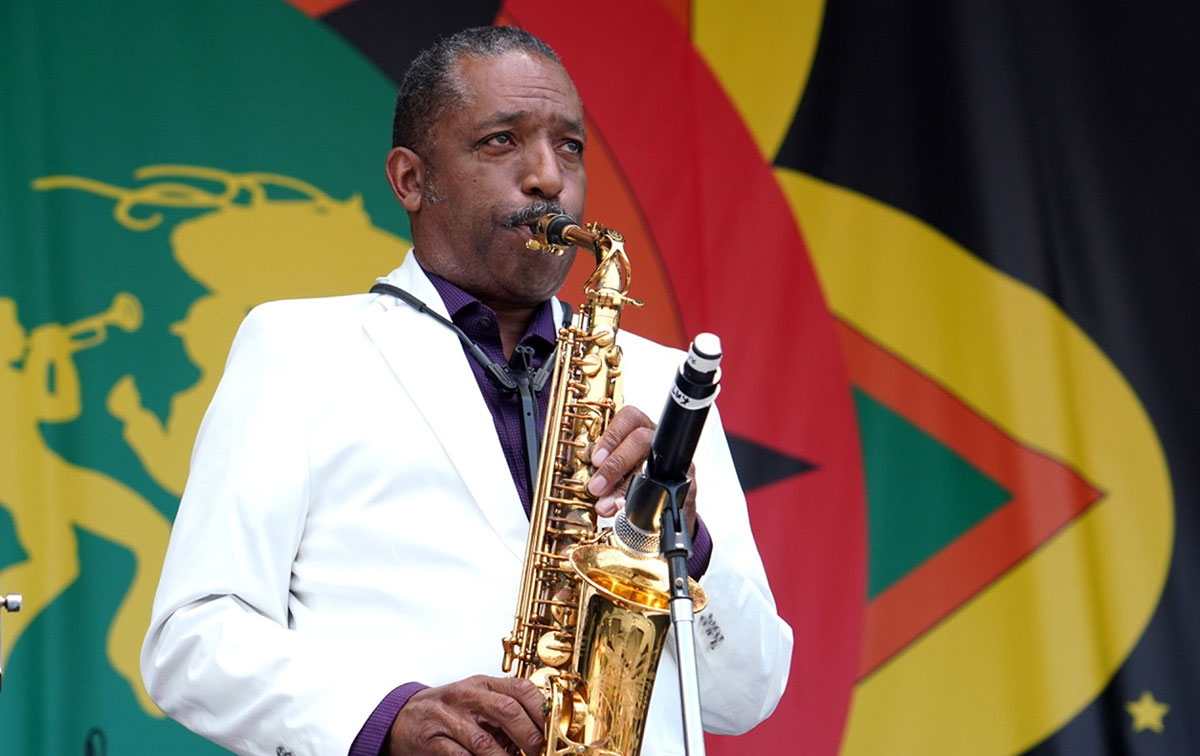 On Monday, Harrison performed once more, this time for no admission charge, in the real Congo Square, which is set within Louis Armstrong Park, at Tremé’s edge. As far back as 1718, enslaved Africans and free people of color gathered here on Sundays, creating a marketplace and practicing sacred traditions of music and dance, a retention of African culture. Thanks largely to the efforts of Luther Gray, who leads hand drummers here each Sunday, the spot earned a listing on the National Register of Historic Places in 1993. Until 2011, when the city council formalized its original name, the one everyone used, it was officially designated as “Beauregard Square,” after Confederate General P.G.T. Beauregard. So Gray was incensed last year when New Orleans Mayor LaToya Cantrell announced plans to relocate City Hall to the Morris F.X. Jeff Municipal Auditorium, which sits on part of the original Congo Square site and has been dormant, rotting, since the 2005 flood.

Before Harrison’s performance, I sat with Gray beneath Congo Square’s “ancestor tree,” a low-slung live oak where locals often pour libations for deceased relatives. He recalled the razing of hundreds of Tremé homes in the late 1960s and early ’70s to create Armstrong Park. “Now, the mayor was coming back for this last little piece,” he said, “the most important slice of all.”

Public outcry against the mayor’s proposal was swift and strong. Last June, a rally at Congo Square and march to the current City Hall gathered hundreds of supporters. The effort was sparked by the Save Our Soul Coalition (SOS), which has coalesced 33 local nonprofits to oppose this City Hall relocation, and to help develop a cultural and community center in Congo Square that properly aligns with both the place’s legacy and the desires of the local residents. For Dow Michael Edwards, a retired attorney who served on the mayor’s transition committee and is a member of SOS, the idea of City Hall in Congo Square was “horrific” to consider. “Our ancestors sacrificed and went to great lengths to maintain a sense of integrity and pride in their culture and to keep it alive in another land,” he told me during Jazz Fest’s first weekend. “And we need to honor that for real, for more than two weekends each year.”

This Sunday at the Fair Grounds Trombone Shorty will close Festival Stage—a position he inherited from the Neville Brothers. Part of a long line of celebrated musicians born and raised in Tremé, steeped in brass-band processions and traditional jazz, he is also a bona fide crossover star. Before the festival, he reflected on the past two years. “It was a terrible, eerie feeling here,” he told me. “I could hear the streetcar but nothing else. All the sounds I grew up with were missing. It reminded me of after Katrina.”

Among the earliest musical sounds on the street after the pandemic took hold were in front of the Royal Frenchmen Hotel, in the Marigny neighborhood. The day before Jazz Fest opened, homemade signs were taped to the hotel’s green shutters: “NOLA is Music”; “Don’t Shut Bands Down.” During the pandemic, the city’s administration had wisely begun to issue temporary permits for outdoor live music. Tyler Daly, the hotel’s owner and general manager, applied for and got one. The performances quickly earned a local following. After a neighbor complained, the shows moved into the hotel’s courtyard. A few months later, the city issued a cease-and-desist letter. An online campaign from fans and an appeal at a city council meeting helped assure another temporary permit. Live music is back at the hotel now—yet the future, according to Daly, is uncertain. Ashlin Parker, a trumpeter who played brilliantly during Jazz Fest’s Ellis Marsalis tribute, told me, “The gigs at the Royal Frenchmen were vital. The place was like a green room for our culture when everything else was closed.”

I was reminded of the months following Hurricane Katrina, when the New Orleans Jazz Vipers, a seven-piece traditional-jazz band with a touch of gypsy guitar, played on Tuesday nights at Angeli on Decatur, a now-defunct French Quarter pizza-and-salad joint—until the police put a stop to it, owing to an ordinance. “It was sign of life,” said attorney Mary Howell, who has worked for decades as an advocate for musicians. “It was a blood transfusion, a hit of oxygen when we needed it.” Now, as then, restrictive policies and a process of selective enforcement often cast musicians as outlaws. “At the same time the city advertises or publicizes these traditions as an intrinsic part of the city and to entice people to come here,” she told me earlier this week, “there are too frequently efforts to regulate or control it in ways that are counterproductive.”

According to a spokesperson for the mayor, the city will maintain temporary outdoor live-music permits as a bridge toward revised policies in the future, including an update to the sound ordinance, which has been particularly controversial. That’s good news. There have been no recent rumblings about a City Hall in Congo Square—but also no disavowal of those plans.

In his memoir, Treat It Gentle, the great New Orleans soprano saxophonist and clarinetist Sidney Bechet wrote: “My people, all they want is a place where they can be people, a place where they can stand up and be part of that place, just being natural to that place without worrying how someone may be coming along to take that place away from them.” Jazz Fest is back. That’s cause for celebration. Yet Bechet meant something bigger than a racetrack—and more permanent, too.