Episode 3 of Portrait Artist of the Year saw some more adventurous portraits from the nine artists selected to paint three sitters:

The artists are listed below – and are ordered alphabetically by surname.

The self-portraits in this episode were a huge improvement on those in the last episode – mainly due to the fact there was more of an effort to paint beyond the head and add props! Plus the painting and mark making was more interesting in terms of different approaches. 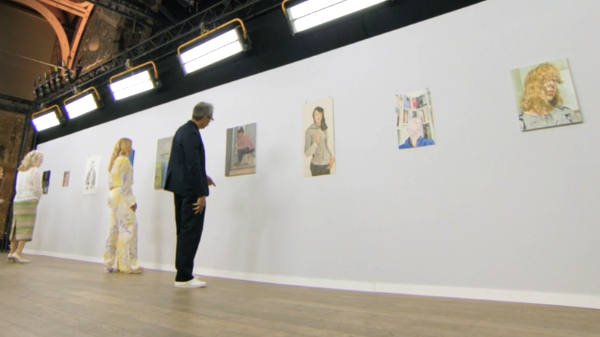 I found it very difficult to do this analysis this week because of the lack of one decent image of all the self-portraits together – and one that wasn’t distorted by perspective. I’ve never understood why they think it’s a great idea to space them out so much which leads to these barrel distortion images.

What was slightly odd this week is that we had three “stretched” portrait paintings.

I was pleased to see more larger paintings. It really makes a difference to the impact they have and the chances of moving forward to the shortlist and possibly the semi-final. You can demonstrate much more about how you approach drawing/painting when you work larger.

That said I really liked the small painting by Anita Conway!

It was good to see more artists doing what I’ve recommended in the past i.e. demonstrating they can paint hands.

Special shout out to

The Head: size and position on the support

I picked up a few comments this week relating to

One thing which ALWAYS needs to be remembered by artists participating in this competition is that small heads are much more difficult to get right.

Smaller heads are what you do when you try to do a portrait involving torso and hands and/or most/all the body. However you really make life difficult for yourself if you don’t bring a support big enough to avoid making the head “too small” – thus making it really difficult to achieve a likeness. Never ever forget this is a PORTRAIT competition and not a painting competition!

However, when you bring a large support and then produce a relatively small head on the support this also looks odd!

A few years ago macro heads in open exhibitions and art competitions were all the rage. I think the trend has died down now and it’s quite unusual to see a head which is a lot larger than real life

There was one portrait where I felt the size of the head was so out of kilter with the rest of the body in the portrait that it started moving into the realms of cartoon/caricature type portraits. This should be avoided. If you’re an artist who is used to doing this I’d very much recommend you need to practice a lot drawing/painting correct proportions to avoid doing this in the heat – due to the fact there’s a distinct tendency for a number of artists to “go to comfort zone” in their approach to painting when coping with the stresses of painting while being filmed for television  for television.

As a general rule, sight size is a good approach. Make the head on your support the same size as it is in real life. Take aids for measurement with you!

Position of the head

This heat had some discussion about the position of heads.

In general getting the eyes around the sweet spots at intersections of the thirds is a good idea. It’s very safe, it’s very conventional and the reason for this is it generally provides a good result! If you’re deviating for this you really need to know what you’re doing in terms of composition and design. (If you don’t understand what I mean by the “intersection of the thirds” read my post Composition – thinking in threes)

Tim wailed that he’d intended to avoid the head in the middle of the support and then realised this is exactly what he’d done! I wondered why he hadn’t spotted this earlier….

Giving your sitter a smile does NOT work in your favour.

There’s a very good reason that there are very few portraits of smiling sitters – and that’s because it’s impossible to hold a smile for somebody who is painting you from life. REMINDER: The people progressing are those who are expected to be able to paint well from life.

Tim Ellis made it very clear that he had not art education and to my mind his choice of a smiling Miquita was one made in ignorance of this convention of “no smiles on sitters”. It’s a dead giveaway that it’s a painting from a photo.

PS When there was the furore about the new portrait of the (now) Princess of Wales in the National Portrait Gallery, the (then) Director suggested to me that most of those making comments about the fact she wasn’t smiling needed to go around the NPG and count the number of portraits they could find where the subject was smiling – as he knew there were incredibly few!

How you make marks with your drawing media or put paint down with your brush adds potential interest to your portrait. Potentially a LOT of interest. It’s a very good way of standing out from the rest.

I think it’s always good to see those who care about their marks, the variety they use and how diligent they are in how they make them

Turn your canvas upside down

This is a VERY old trick – and the old ones are frequently the best. Turning a portrait upside down as one artist did in this heat is an excellent way of spotting aspects which don’t look right – for example shapes which look wrong or tonal values which are making the portrait look odd.

The issue of technology

I’ve made the point more than once in the past, that the distance artists are from their sitters (which is way further than it would be if they were a real sitter for a commissioned portrait)  requires artists to use technology to be able to see some of the details.

However the Judges are not keen on those who are wedded to technology and this replicates itself when creating the portrait.

What was interesting in this heat is that Tim Tozer painted a self-portrait which was self-evidently done from a photo. However he then largely painted from life during the heat. Demonstrating that his style of painting when painting from photos does not deviate that much from the style used when painting from life. That’s a pretty big recommendation to Judges that this person can cope with painting a commission where they will be expected to paint from life but will also have to use reference photos.

The Judging comes first from the sitters before moving on to the panel of Judges.

First the sitters got to choose the portrait they liked best – which they get to take home! The SITTERS chose portraits as follows…..

The Judges commented Suggs was a good sitter and all three of his artists were doing really well.

The Judges commented that all three artists were wedded to their technology i.e. painting from their phones or tablets and not the sitter.

Interestingly as you can see, all three artists opted to draw/paint Eve’s torso and not just her head.

Critique by the Judges

I found that comments from the Judges at the end were more “short-handed” and less critical than usual.

The Judges were less impressed by artists who

The latter is getting a bit repetitive. Got the message yet?

Interestingly, for the first time in a long time, these were ALL the same artists that the sitters chose.

I really liked Sarah’s self portrait. I thought it was both visually arresting and very clever – and seemed to be well painted. She seems to have a talent for making the complex look simple.  I applaud her for painting the head torso and hands in the heat – and getting both props in – but I think it was the self-portrait which carried her through to the shortlist.

Tim seems to like painting people on very large supports. There’s an awful lot of painting which is just “filling in the background”.

His painting is accomplished and he likes to set himself challenges – but I didn’t like his painting of the hands which looked sausage-like and muddy to me – and the head seemed too small for the torso.

I thought the self portrait very accomplished – it was relaxed and ‘normal’ looking and yet arresting at the same time due to the way the eyes look straight at you.

I thought Anna got a very good likeness of Miquita and despite being ‘wedded to her technology’ demonstrated that she knew how to get a good likeness without looking like she’s painted a digital image.

For me the weakness was the shoulders which were too narrow with shapes which look wrong to me. A bit more attention to the shoulders and upper torso might have seen a different decision.

The winner of Episode 2 was Tim Tozer. He’s obviously a very competent artist in terms of size of portrait and scope – as indicated by both portraits.

Oddly the video of him painting the portrait in the heat is marked up as “private” on Vimeo, whereas winners of previous heats are not. (You can see speeded up videos of each portrait painting on this link)

I think Anna Bogomolova might have been in with a shout if at least one of her paintings had been more than a head and shoulders. She works quickly and I think could have done more in the heat.

and get an email to your inbox every time I publish

The sitters next week will be

If you want to look back at reviews of previous series you can find links to them in
This year’s heats are: