The Green Bay Packers added not one but three wide receivers in the 2022 NFL draft to help offset the loss of Davante Adams and Marquez-Valdes Scantling. The group is headlined by Christian Watson, who the Packers selected 34th overall, making him the team’s highest draft pick at wide receiver in 20 years. Two rounds later, they took Romeo Doubs, a potent deep threat out of Nevada. So far, the early returns on Doubs have been good, leaving many people optimistic about what he can bring to Green Bay’s offense.

Not many wide receivers can say they finished their college careers with back-to-back 1,000-yard seasons. Thanks to catching passes from a strong-armed prospect in Carson Strong, Doubs became one of the most explosive playmakers in the country. However, just flip on the tape, and you will see Doubs is more than a product of his talented college quarterback, who is now with the Philadelphia Eagles.

Standing at 6-2 and weighing around 200 pounds, Doubs has an ideal build and is also a good athlete. He ran around a 4.50 in the forty at Nevada’s Pro Day. General manager Brian Gutekunst is especially excited about Doubs, calling him one of the more polished guys in the draft.

“He’s got length, he’s really fast, he’s a big-time playmaker, and he’s done it for multiple years at Nevada,” Gutekunst said after the draft was finished. “He’s probably one of the more polished players coming out of college just because of his experience. We’re excited to see what he can do.”

Time will tell how ready Doubs is to make an impact at the next level. There aren’t many receivers who enter the league and hit the ground running. In Doubs’ case, it will be even more difficult since he must first earn the trust of Aaron Rodgers. However, Doubs does possess a lot of good traits that could help him develop into a productive pro. There are also some weaknesses in his game that could hinder his ability to get on the field early on with the Packers.

Let’s identify the good and the bad in Doubs’ game by looking at the All-22 from his junior and senior seasons.

Doubs made a living by getting behind the secondary of opposing defenses. Here we see how easy it is for him to blow past the coverage on a simple go route. Doubs takes advantage of an aggressive corner playing up on him and uses his speed and acceleration to create plenty of separation. Furthermore, beating press coverage with his quickness and upper body strength should not be an issue.

Even when the corner is trying to accommodate for Doubs’ speed, it is still not enough. He accelerates so quickly that it can be completely overwhelming for defenders. This corner can’t help but fall down trying to keep up. He may not be as fast as Valdes-Scantling, but Doubs will have a chance to make plays downfield.

Really impressive stuff here from Doubs. He sets up the post-corner nicely but the late in-air adjustment and tracking is what caught my eye. pic.twitter.com/ZetpJtlNk2

Doubs doesn’t just rely on go routes when working down the field. Here is a post-corner that he sets up beautifully to put the corner in a tough spot downfield. But the route isn’t the only thing that is impressive about this clip. Doubs is expecting the ball to be thrown toward the sideline, so he is looking over his outside shoulder. When he notices the ball is thrown inside, he makes a quick adjustment without losing much speed. You love to see this kind of elite ball tracking.

I look at Doubs as more than just a deep threat. Sure, that is where he did most of his damage, but he is also smooth when running stuff underneath. This out route has a good bite to it but let’s look at the corner a little bit closer. He’s in off-man, and Doubs’ quick acceleration forces him to lean into an early backpedal. He stands no chance when Doubs turns toward the sideline. Defenders know that Doubs could be running a vertical at any time, which could help open stuff up for him, as we see here.

Similar play here, but this one shows Doubs’ technical prowess as a route runner. Here he flattens his stem out more toward the sideline. It is so the defender can’t see him and watch the quarterback at the same time. By attacking the blind spot, Doubs can settle into a nice pocket for an easy catch.

Doubs’ acceleration will get defenders leaning so he can create separation on curls. Also does a nice job working back to the ball. pic.twitter.com/4ONVxViSNh

Doub has a way of making every route look like a go route. However, he quickly snaps off this curl route at about 15 yards. The corner does a good job of sitting on the route, so Doubs shows good on the fly processing by working back to the ball. This route is a staple of every offense, and Doubs knows how to win with it.

Don’t get it mistaken, Doubs can really fly. Can effortlessly cross the defenders’ face on linear routes. pic.twitter.com/LbLeHc1OPZ

Doubs caught 20 touchdowns over his final two seasons and could emerge as a successful red-zone threat. Watch and see how well he has mastered these linear routes. He runs a skinny post with a slight stutter at the top of the route to cross the defender’s face. Doubs could have success in one-on-one situations where the defender has to try and match his foot speed.

Smooth operator near the sideline pic.twitter.com/35XWT1nqSA

Savvy little clip here of Doubs making a play near the sideline. It is not exactly the back shoulder throw Rodgers made famous, but it is a solid example of Doubs’ awareness to get both feet down. In my opinion, Doubs has the catch radius and body control to make back shoulder catches in the future.

Doubs’ competitive toughness really shows up in run after the catch. Also, he is surprisingly nimble with the ball in his hands. pic.twitter.com/b42ptjq8Ik

Scouts described Doubs as an alpha for his presence in the locker room and on the field. His competitive toughness is definitely on display when the ball is in his hands, as he is consistently fighting for extra yards. Doubs will be an ideal candidate for quick screens similar to this. Also, we see a new side to Doubs’ athleticism here with his noticeable agility after the catch. An important note, Doubs returned punts all four years in college, averaging 12.5 yards per return and returning one punt for a touchdown. Don’t be surprised to see him competing for punt return duties in training camp.

The #Packers could use Doubs as a “big slot” if they wanted. pic.twitter.com/2BmkBG5fBz

I don’t think Doubs will be limited to being an outside receiver. He is actually a well-rounded player and could be considered for a “big slot” role in certain formations. In this play, Doubs is able to diagnose zone coverage and work behind the linebacker before getting to the soft spot in the middle of the field. Doubs’ football IQ will help him be effective from different alignments.

You want Doubs to make this play, but look how competitive he is when the ball is in the air. pic.twitter.com/8EdTcmVWR4

You’re probably tired of hearing about Doubs’ speed at this point, but this play also shows him trying to high point the ball downfield. He isn’t quite able to bring this one in with two defenders in the area, but it is still a great effort. Catching passes from Rodgers where the ball is almost always in the right spot should help with Doubs’ ball skills.

Of course, we can’t talk about Green Bay receivers without going over run blocking. This is one of the few areas where Doubs is underwhelming. In a lot of instances, he is not engaged as a run blocker. He has the size and mentality to be much better, but it almost seems like a chore.

Doubs is not very engaged as a run blocker. pic.twitter.com/vrZHzVYKgo

The Packers must feel like they can do a complete overhaul with Doubs’ blocking. Everything about this clip seems strained even though the ball is coming to his side of the field. It appears to be a mental thing, as perhaps his coaches at Nevada didn’t harp on it. That will change fast.

I really don’t have many issues with Doubs’ route running. Some of his breaks can be a bit rounded, but stiffness in his lower half is one thing that stuck out to me. He struggles to consistently sink his hips on breaks, which negatively affects his ability to change direction. Against sticky corners, Doubs may struggle to separate on in-breakers like this underneath.

For me, it is a lot of detail-oriented stuff that Doubs needs to focus on. He will continue to improve as a route runner, and the whole run blocking thing will have to change if he even wants to get on the field. Something tells me he will have a completely new approach as a blocker by the end of his rookie season.

Doubs is still a rookie and a fourth-rounder at that. The bar is subsequently low, but fans should be excited about his ceiling. Doubs is a legitimate deep threat with the tools to be much more. Hopefully, he can put it all together to become a reliable contributor to Matt LaFleur’s offense. 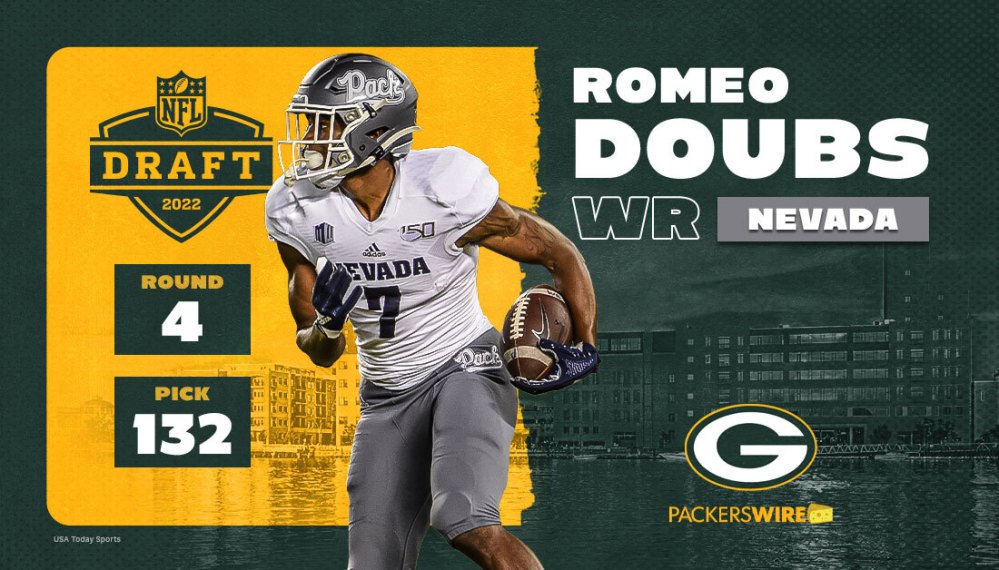